Thursday night, I didn't notice the washer stop mid- cycle.  To be fair, my kitchen is loud, especially when all of the appliances are running.  And that night, I had the dishwasher, clothes washer, and dryer all going at the same time.  One less source of noise had little consequence on the overall cacophony of domestic life.  At first, I didn't realize that silence was a death knell.  I thought it was another minor inconvenience.  But, before we get too far down the rabbit hole, let me tell you the story of how I managed to stuff a house's worth of appliances into a 2 bedroom apartment.


Not long after the stars of the Popcorn Chronicles moved out, the laundry room in the basement started to get on my nerves.  Between having to fish damp clothes out of the washer, or call the repair company because the paddles in the dryer have somehow been melted into the appearance of pulled saltwater taffy, I had lost the patience with community wash.

Years prior, I'd considered a compact set of laundry machines for the apartment I was in prior to getting married and buying our house. I knew they existed, and an approximation of what they cost new.  A thought bubble appeared over my head; "I wonder if these ever show up used, like on Craigslist?". 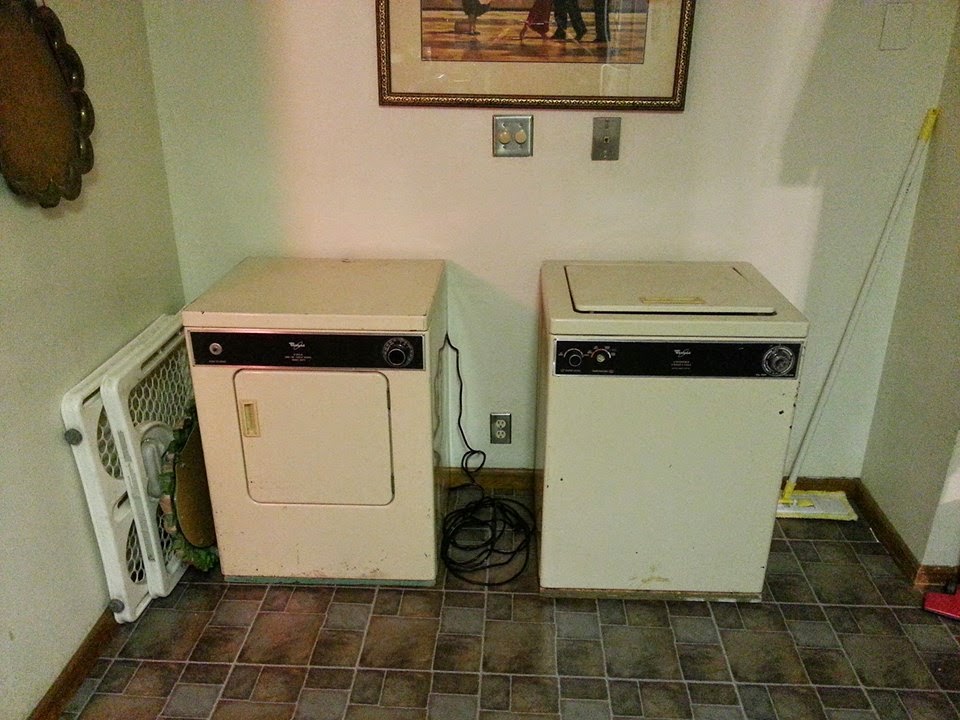 It didn't take long to find a pair.  I'd mentioned it that I was dreaming of owning them, and a friend of mine let me know via social media that there was a set available for a pittance, with the option to deliver online.  (Love him, but my Mini Donovan wasn't going to come through for me on transporting them.)    They were ugly, possibly older than I am, held a very small load, and I wasn't sure if the landlord would approve of them, but they were a realization of several small dreams in two rusty packages.

A noteworthy side-story about using Craigslist to purchase appliances old enough to get a break on their car insurance rates is that sometimes, you get more than you're shopping for.  While I was happy at the find, I wasn't so happy that the seller, who looked much like Edgar from Men in Black, kept my phone number after the transaction, and repeatedly asked me if I "wanted to hang out sometime?.  Yup, washer, dryer, offer for a date.  Thanks, but I think I'll pass.  Also, thank goodness for Google Voice's "mark number as spam" option.

I had to put some sweat and cash into the set after I bought them.  I bought a set of casters for the washer, and screwed them on so it would be easier to move it from the storage location to the sink.  However, in true form, I managed to buy two locking casters and two non-locking ones.  The good news is, I never did have a whirling Dervish incident in the kitchen.

As an aside, while installing them, I thought I had damaged my drill.  Thunderhead was with me as I exclaimed, "Shit, I think I just burned out the chuck."  Puzzled, he looked at me and said, "Huh?  What's a chuck?"  As I remember, I patted him on the cheek and said, "Oh honey.  At least you're pretty."  This is one of the many examples of why we joke that he's the girl in the relationship.  That, and the bastard looks better in my mini skirts than I do.  (Before this manages to piss anybody off, however, we do trade the dominant personality pants pretty fluidly.  It's one of the things I value pretty highly in any relationship, romantic or otherwise.) 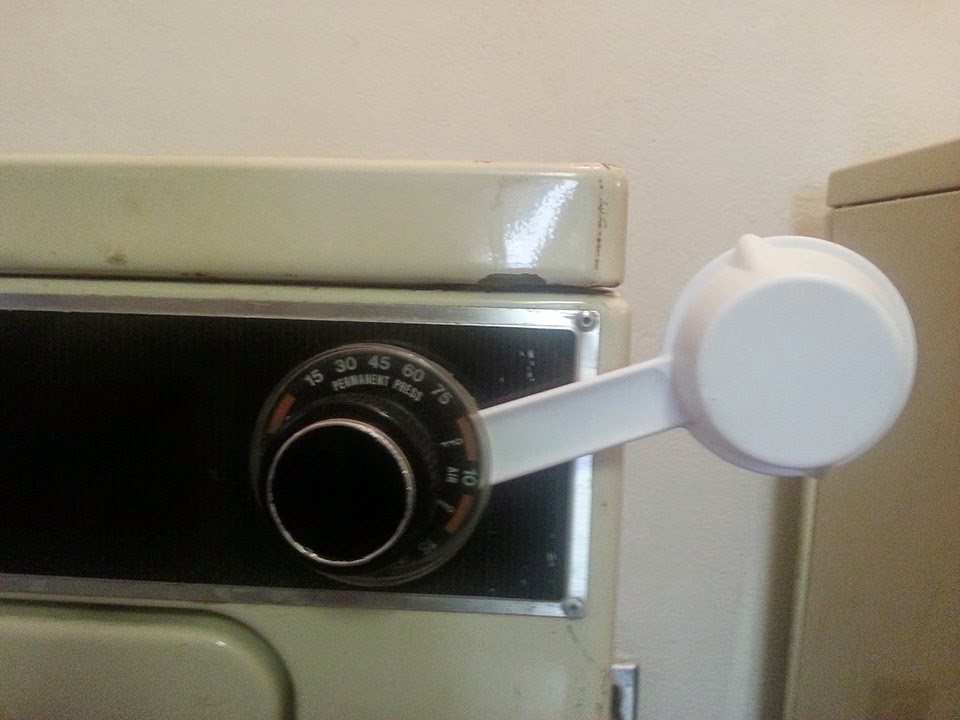 I bought a new-to-me timer for the dryer and installed it myself.  It ran prior to replacing it, but the gears were so old and worn that you had to wedge something into it just right for them to make contact.  You can see my solution in the photo.  I added a new lint trap, a new drainage hose, and learned how to use a thigh-high stocking and a binder clip as a vent hose.  My heating bill is nothing in the winter, but my AC bill is astronomical in the summer.  And I am more than fine with that.

There were some mishaps.  Not gonna lie.  The occupants of my apartment prior to me fried errythang, and dumped the grease down the sink.  I've had my fair share of evenings spent cussing and fighting with a plunger or drain opener.  Because of the volume of water in a load, my poor downstairs neighbor had some waterfall through the duct moments when the water hit another blockage in the pipes.  Thankfully, those seem to be very few and far between these days.  I'd also have to do a load or two almost every other night to stay on top of things.  I can think of worse grownup obligations.

Friday morning, I did some searching online to see what might be causing the problem with the tub not draining.  The most plausible was a problem with the pump.  Knowing that it had sucked up the occasional sock before, I was hoping it would be as simple as getting to it and removing the offending item.  That night, with some much appreciated impromptu help, we started tearing the washer apart.  We got so far as to discover that we'd need specialty tools to remove the wash tub, without the guarantee that it would be a simple fix, or the replacement parts would be available if that was the way to go.

And that's when the towel, soaked with water from draining the water prior to any attempted repairs, was thrown in, and the below status update was born.


"You stupid son of a bitch!" she exclaimed. "When I say pump, you do it! What good are you to me with your water just sitting there, growing ever colder, your suds bursting in pathetic last gasps of cleanliness? Aaahrg!"

In frustration, she kicks the machine. "I don't do broken. I do works, isn't working currently, and replaced. Don't try to change me, it will only end poorly for you. I'm not one to throw good money after bad."
~Excerpts from Fifty Shades of Lights, Darks, and Delicates.

All in all, I think I got a pretty solid 2 years out of machines that should have been retired before I could legally drink.  The painful part was telling both my wallet and savings account that, while I had meant it when I said I'd never hurt them, there was no avoiding it this time.  I transferred some cash from savings to checking, and headed to the appliance store to replace my washer.

While many appliance salesmen groan when they hear a customer say, 'I just want the cheapest thing you have on the sales floor." business was slow, and the entire transaction took, at the outset, 30 minutes.  We even both won in that  I bought the service plan.  Peace of mind for me, and a little extra in his check for him.  (I had a service plan replace my front loading Whirlpool Duet at the house under the lemon clause, so to me, they're worth it.) 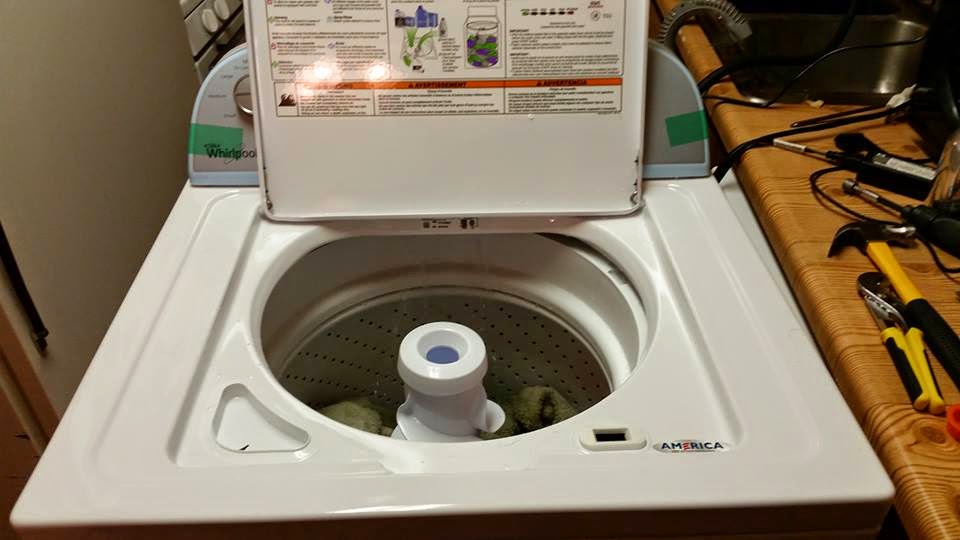 Thanks to the modern marvel of the minivan, we were able to get the new unit home, hooked up, and working before 7:00 PM.  The test load?  All of the towels and the content of the load that was in when the prior machine stopped working the day before.  The only bad thing I have to say about it is that the basket is so large that I'll have to break loads up into two parts to keep using the old dryer.  Gee, life's rough.

When Thunderhead got home, we wheeled the old machine out to the curb, stripped the casters off, and left it to the hands of the neighborhood scavengers.  By 2:00 AM, it was gone into the night, nothing but the old particle board that held the wheels on remained to mark its passing.

To wash new loads in the new machine, it's night and day.  The agitation is nearly silent compared to the old unit.  The cabinet is also larger, so it makes both getting into the fridge mid-cycle harder, and a great motivation for dropping some weight.  I'm an avid air-bather, and metal on naked skin is COLD!

Maybe I'll upgrade the dryer in a few months.  Maybe I won't.  I'm just glad to have been able to manage the washer replacement with the help of my darlings' willingness to go all "plumber Joe" on a problem with me, a little financial cushion, a minivan, owning more tools than a renter really needs, and not suffering delays unless they are absolutely mandatory.

Edit - a tribute to the fallen.