I Hope 2013 Knows What Is Expected Of It

Let's just do a 4 year rewind for a moment.

2010: Filed for divorce, tried to start dating again, lived in the house with the ex and his GF to try and save a buck/the house.

2011: Gave up on saving the house, listed and sold it in a short sale that I thought might just kill me, donated what felt like half my stuff, moved, met Adrian, started performing and running tech with the Samurai of Spoken Word.

2012: Moved again, started dating Adrian, changed jobs, bought Donovan at the end of the lease, checked off the last item from the "I need to change my life around" list, realized I get bored without a challenge. (And by challenge, I seem to mean "life event")

Finding Help - Addendum to "Let's Talk About The Nutjobs"

It occurred to me that I’m breaking one of my cardinal rules; don’t tell me that shit needs to change and not give me a solution to try with my post “Let’s talk about the ‘Nutjobs’”.

I didn’t bother to give you any resources with which to change the world, and for that I’m sorry.

Much Love To You On Christmas 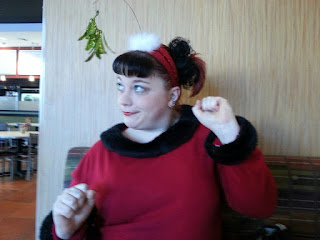 Hey you guys.  Before I forget or have too much of the Christmas Spirits, I wanted to say thank you for helping contribute to the weirdness that is my life.  Whether it's in a small part, occasionally, or every other Tuesday when I'm on the verge of peeing myself, howling with laughter.  I say it every year, and I mean it just the same; I'm nothing without good friends, laughter, tough love, heated debates, and the occasional pinch on the bum.  Y'all keep the poly in polymath.  Merry Christmas.
Posted by Ephemily at 12/25/2012 08:53:00 AM No comments:

The Gift of Loved Ones

My insurance company would tell you I live in a blighted area.  To hear me talk about the state of the apartment the day I moved in, you’d think it was located in downtown Beirut.  After the fun with the domestic violence unit and case of microwave popcorn that got us through the summer of tough love, you'd think I'd know all the beat cops by name.  However, despite all this, I'm probably the happiest I've ever been.

I think I’ve had one.  One of those million dollar ideas.  I’ve got a line on the next zumba or px90 weight loss craze that will sweep the deskbound wage slave culture like Paul Bunyan cleaning up his wood shop.  The idea came to me as I was watching the motions of my fellow tech as he was taking on of *those* calls.  You know, the kind where you have to *sound* like you’re perfectly calm and collected, even after you’ve told someone how to resolve their problem 6 times already, and they’re still rambling on about the sweaters they knit for their cat last night, or complaining that their background is full of polka dots when they called to report their printer was eating paper like it was constipated and needed the fiber.
Read more »
Posted by Ephemily at 12/19/2012 02:37:00 PM No comments:

My One Night Stand with the Mexican Farmacia

The only thing that would have made the illusion that the inside of my head is an awful lot like an old school arcade better would be the nostalgic sound of a pinball game in play.  As I was stepping off the low speed treadmill workstation at work this morning, I noticed that my right hip was a bit sore, but not as sore as it could have been, having slept on the equivalent of a queen sized marshmallow overnight.  In years past, if I wasn’t sleeping on some plywood with a couple of cottonballs hot glued to the top of it, I’d be in a world of literal hurt in the morning.

Let's Talk About The "Nutjobs"

Pillow talk last night wasn't about the flatulence trapped under the covers, a weird mole one of us had sprouted, or how much we'd missed each other during the day.  It was about this damn, ever present shooting we're all talking about.

First off, I'm offended that we're overlooking the hospital shooting the following day, and the mall parking lot shooting that happened on Sunday.  Yes, those kids were taken too soon.  I don't think there's a single one of us that thinks otherwise.  But, if we’re going to claim the news isn’t over sensationalizing for the sake of ratings, then we should all know about the guy who shot up the 5th floor of the hospital, wounding three before being killed himself, or the gunman who fired 50 shots into the air at the mall.  We don’t know about them because there wasn’t enough of a headline worth more than 15 seconds of airtime.  Nobody was a victim.  We couldn’t sell headlines when none of those 50 shots hit anyone, or the only person to die was the gunman, who was killed by police.

It’s Dec 16th, 2012, and there’s snow falling outside.  Not enough to have to shovel, or to even really stick yet, but the city noise is dampened, and kids out there have their hopes for a white Christmas renewed.  I figured, there’s no better time to go over why I have a Mini Cooper as my daily driver than when people are going to start considering it a foolish choice.

The second to last week of October 2010 managed to cram a whole lot of stories into 7 short days.  On the 23rd, my short but intense relationship with Flyboy came to an end when he packed up the stuff I had left at his apartment, delivered them to my house, and told me that he didn’t see me in his life a year from now, much less next month.  I spent that evening in an “is that your bellybutton?” shirt, enjoying a drink or two with some ladies that are dear to me.  By Monday, I was more or less ok.  I’d come to the conclusion that since he was the first thing I could call a relationship I’d had since I’d opted for divorce, that I had been nearly ready to say I love you to the feeling I had around him, not the boy himself.

Which was good, because nobody likes a mopey birthday girl.  I ushered in the big three three two days after being dumped, and without the “bag of shit with penises on it” I had been threatened with if I didn’t tell Flyboy what I wanted.  (He was under the impression that I was only telling him what he wanted to hear when I said I didn’t have anything I wanted or needed, that if he got me something, it would be a pleasant surprise and not a necessity.  Really, I had a 3 bedroom house stuffed to the gills at the time.  I didn’t need anything else and didn’t give a damn about his paycheck.)  I can’t remember what I did to celebrate.  I’m not sure if that means I didn’t do anything, or I just had so much to drink that I blacked out.  Either way, it was the perfect setup for Tuesday when the legal system gave me the best birthday present ever.

Movie Night With The Ex

I had this moment a week or so ago, when I was reminded exactly what kind of strange and wonderful life I’ve got.  My ex-husband and I started our divorce in late 2008.  Well, at least the emotional part.  Financially, we weren’t solvent enough to split.  So, we were trying to settle up some of our debts before we did the paperwork.  That led to some wild times at the house on Crown Point.  And by wild, I mean living in the same house with your soon-to-be-ex husband and his girlfriend.  That’s enough inspiration for many a Hollywood Tragicomedy.  Somehow though, we made it work.

And Think About What You've Done!

You know the phrase, “talking out of your ass”? Some people do it to sound important.  Apparently, Thunderhead and I do it to express affection.  Literally.

I’m a gassy person.  I’m pretty sure I could have been included in the national study on cow flatulence and global warming.  It’s that epic.  I also like to sleep in little to nothing, and enjoy curling up under a really heavy comforter (or two) on the bed.

When I was growing up, we had a security company in town named Cox Home Security.  After the 3:00 AM shocker Thunderhead had last night, I would love to travel back in time to pitch the idea of coxblocked as an ad slogan to their marketing department.

I can tell you one of the reasons this fat girl is jolly is because life never ceases to be entertaining.  And let’s be honest, at the time of this writing, I’m weighing in at 207 lbs, and wear a size 16 if the pattern is generous or has 15% or more spandex in the fabric.  I’m not slight, and have no intentions of ever being so.  One of the hazards of being a plump girl is that parts of your body tend to either rub together, or moosh into slightly lumpy versions of what your average runway model has.  For me, being apple shaped, it’s my belly and my thighs.  I’ve long told the joke that pants that are too tight tend to show off an entire herd of camel toes if I’m not careful.  I’m a meaty woman.  My thighs rub together when I walk and apparently create a vacuum chamber with the help of my vulva while laying on my side.

If you have to fracture your soul to create a horcrux, then I think in late 1999, early 2000, I would have been on my way.  When I asked a friend and fellow Samurai whether I should press the publish button for this post, he asked me if it was true and if it was something I feel.  I can answer yes to both questions, even if what I feel and what I remember are the ripples on the pond of the original events.  In short, I was emotionally abused as a young woman.

I'm not sure why I chose to write about this now.  I know that I am absolutely not doing it for pity.  The idea of that being the emotion I invoke makes my stomach turn.  Maybe it's an effort to show others that even if you're face down in an emotional mud puddle, it's not the end of the world.  Maybe it's because I'm tired of carrying it around.  Maybe it's because I blame the failure of my first marriage on my being gunshy to love.  Maybe it's to ask forgiveness in a sly way for when I become emotionally flaky.  Because of all this, I tend to disengage when I'm unsure about my involvement in a person or event.  I can't say.  I've paced and pondered and chewed my lips for years asking the same question.  In the end, all I can do is type and realize that maybe I don't have to know why this time.

My phone buzzed this morning. It was a text message from a good friend of mine asking how things were since we hadn't spoken in a while. While we chit chatted to catch up, she mentioned that she could barely believe that it was December, and that 2012 was nearly over. I mentioned that, compared to previous years, it barely feels like I've accomplished much this year. She, being the smartypants I know her to be, responded by telling me that you can't declare bankruptcy, get divorced, sell a house, and move twice every year. It would get old and pase in a hurry.