Ladies and gents, I would like to introduce you to Les Raub.  Not many people make my list of truly creepy people, but this guy is in a place of honor among those few.  He's earned that place of dishonor but just not getting what it means to be rejected.  No means no!  Don't make me tell it to you with a restraining order.
Read more »
Posted by Ephemily at 10/28/2013 05:42:00 PM No comments:

I'm in a ridiculously warm fuzzy mood tonight, and because of that, I wanted to completely embarrass myself all over the internet.

Author's note:  I have been holding on to this for a while, not sure if I should publish it or not.  I finally decided it was worth it to share for a good giggle.  We're lucky (heh) to have this brewery in our backyards, and hopefully they can take a little ribbing from a beer fan.


I love you, man.  I do.  I think the fact that you’re practically in my backyard is awesome.  You done made me proud on more than one occasion.  But, we have got to talk about this seasonal brew of yours.  The Spring Break Belgian style saison was more of a letdown than the IRS declining to investigate Amy’s Baking Company for tax fraud.

October 11th is National Coming Out Day.  I know I've said it before, but I'm gonna say it again because it is important for people to feel safe.  I am an ally.  I don't give a rat's ass if you're straight, gay, lesbian, bi-curious, asexual, pansexual, genderqueer, lactose intolerant, Capricorn, or even Republican.

The exception to the above being if you're a girl who kisses girls only when booze is involved.  That's a cry for attention and bugs the shit outta me.  If you're gonna kiss a girl, do it because you fancy her, not because you want the star quarterback to pop a boner for you.  It cheapens the emotions and sincerity of those who truly are attracted to their own gender.  Knock it off.  Find a different way to entice Johnny Bulge.

Those of you who find yourself somewhere other than straightsville, you have nothing to fear from me regarding accepting you for who you are.  I value a person more for their substance than what gets them all tingly in the bits.

My name is Ephemily, and I am an ally.

It’s not really a secret, but my social life hasn’t been much more than my enjoying my alone time recently.  I've embraced my inner introvert and have been getting lost in my own thoughts and manufacturing my own entertainment.  It’s not a bad way to live, but after a while not only do people start to take it personally, but eventually the hunger for human contact drives me to stick my head above water.

Instead of above water, I guess you could say I’m sticking mine into a pot.  A pot of spaghetti sauce.  Even in my most hermity moments, I do still enjoy company.  So, this Sunday, as a coming out party of sorts, I’m having my spoken word group over for dinner.  It’s Friday, and I’m getting started early.  I don’t want to have to do all my cooking on the day of, so tonight, I’m making the pasta sauce.  It’s not entirely from scratch like the last batch I made.  So, instead of blanching tomatoes and peeling them over the sink, I opted for canned ‘maters.

First of all, when my neighbor returned my can opener and told me that it sucks, she was wrong.  It’s not a can opener, it’s a failed steampunk project.  Someone glued some gears on a couple of plastic sticks and gave up on making anything costumey or useful out of it.  So, I got to open two 28 oz cans of tomatoes with one clench at a time.  If my hands were my pelvic floor muscles, I could blow smoke rings with my vagina about now.

After plopping the tomoatos into a large stock pot and wiping the splatter off my shirt, it was time to mince up the add ins.  I opted for some fresh garlic, baby portabella caps, and a small onion.  The mushrooms surrendered to my knife without much fight, and they went into the prep bowl.  Garlic is one of my favorite spices to work with, mostly because peeling them can involve smacking the shit out of them with the flat edge of a knife to get the paper off of them.  After a shit day at work, I often have fresh made garlic anything.  Call it food therapy, if you will.

The onion presented a different challenge.  Not that chopping one is hard, just that I hate the burning sensation in my eyes that a fresh white onion causes.  Being fresh out of gum to chew to see if that makes a difference, I had to take a different tack. 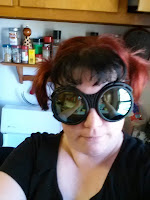 I’ve been mulling over making up a steampunk outfit for some time.  I’m suffering from creativity block when it comes to mechanizing my look.  But, that didn’t stop me from buying the requisite goggles.  They were conveniently located on my bookshelf for absolutely no logical reason.  Suddenly, they became a kitchen utensil.  I give you, cooking with Ephemily, the cover of any future cookbook I decide to make:

I wouldn't recommend using goggles for chopping more than one or two small onions, but in all, it worked pretty well.  I could get through the one I needed to with minimal stinging, and a heck of a selfie to go with it.

Wall of Shame - I Got One Word For Ya

Easy is not the same thing as enthusiastic.  Though, I worry that the syllables in the second description might be beyond his comprehension. 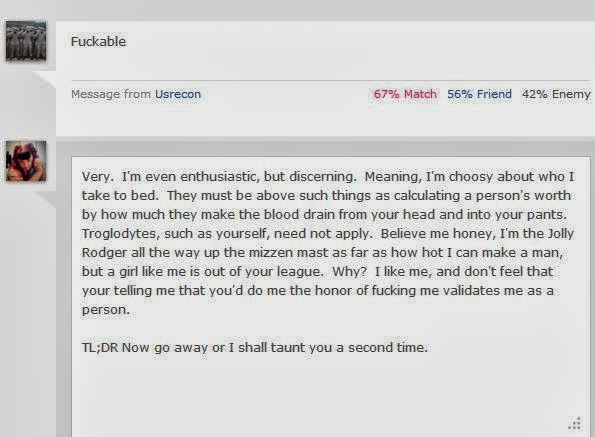 I'm pretty sure there's a one strike rule out there and this guy just violated it.  Hard.

I still maintain an OKCupid account because I like to talk to people, and I'm also a moderator.  It's my dose of schadenfreude when I need it.  I've been getting more and more messages that are really. . . Well, you'll just have to take a look.  I'll be posting them for their entertainment value as I get them.  Enjoy.