I’ve found myself telling this story twice this past weekend, so, I figure it’s time to write it down.  That, and it's a continuation on a theme of rednecks gone wrong.  So, it's a gimme, really.

As a teenager, I was a fan of the X-Files.  I watched the entire first season on the couch with the then love of my life.  For later seasons, I was in college, so I’d catch them when I could.  It was tough since it was on a Friday, but now and again, I managed to catch a new episode.  I’d either find myself in one of the campus lounges, or I’d be perched in my desk chair, craning my neck to see the picture on my tiny 13” TV/VCR combo.  Home was one of those I saw as a first run.

Now, let me tell you about Home.  It originally aired on Oct 11th, 1996 and was the first of two television episodes to display the viewer discretion warning before the opening credits.  The story begins with an infant being buried in a rainstorm by two horrific creatures that are of questionable relation.  As the story unfolds, you learn that the men you see in the opening scenes are the brothers/uncles.  One of them might be all this AND its dad.  Yes, the Peacock family had lived in their dilapidated house/burial ground since the civil war, had shunned indoor plumbing, electricity, and “kept it in the family” if you get my meaning.  After the autopsy of the infant determines one of the Peacock boys was the father, the FBI was called in to investigate a possible kidnapping.  You see, it was an all-male household after Ma Peacock died in a horrific car crash a while back.  Or so everyone thought…

Cue the hair standing up on my neck and the heebies a plenty.
At some point in the investigation, our intrepid heroes Mulder and Skully get into the house to look for the woman that they’re sure has been kidnapped.  All the while, these creepy eyes in the dark are watching them.

Bear in mind, I’m a sophomore in college at this point.  I’m out in Pennsylvania for school.  Just the previous weekend, I’d driven through some of the scenic countryside on my way to and from Baltimore.  I was headed for the airport because my then boyfriend was visiting.  I swear to you, I’d seen some rural homesteads that looked like they might have been a runner up for an on-location shoot.  Throw in a dash of rabid imagination, and when they pulled Ma Peacock out from under the bed on her mechanic’s creeper, I’ll admit to jumping a few inches off the chair in fright.  She was a quadruple amputee, having survived the aforementioned car crash that would have killed most people from the shock alone.  As a direct result of all the inbreeding, she and her boys were impervious to pain.  After the accident, her kids, not trusting doctors, hacked off all her damaged limbs and strapped her to an oversize skateboard and kept her under the bed!  Imagine having this thing staring out at you from a TV at 11:00 at night! 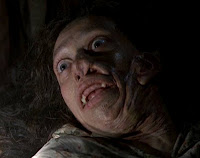 Being 18 at the time, and having recently seen places where this episode could have been shot practically in the college's back yard, it's safe to say that I fell into an uneasy sleep that night.

Now, let me tell you about my dorm room at the time.  It was, quite literally, a cement block rectangle.  The furniture included was a desk, a chair, a bureau, and a waterbed-like frame and mattress to sleep on.  My roommate and I had picked up a small carpet for the cold, tile floor, thrown up some white Christmas lights around the border of the room for "mood lighting" and plastered the walls with more angst, Goth, and pop culture than you can see in an entire season of Buffy.  Notice, I never mentioned closets.  That's what our bureaus were for.  That didn't leave room for a chest of drawers.  No problem, that's why the bed had double duty.  There were, conveniently, drawers under the mattress.  I'm sure you can see where this is going.

It's very early morning on that chilly October Saturday.   2:00 in the morning to be exact. Suddenly, and I'm wide awake, sitting bolt upright in bed.  My skin's clammy, and I've immediately forgotten the nightmare that catapulted me from my sleep because I've violently remembered THERE ARE DRAWERS UNDER MY FUCKING BED!  I fumble for the plug to turn on the Christmas lights (Because, as stupid as it sounds now, I was really trying not to wake up my roommate by turning on the overhead light.) and tear the covers off of me.

I'm sure from a candid camera perspective, it was hilarious to watch me, hair all a mess, disheveled PJs, sitting at the base of a clothing geyser as I ripped every shred of clothing out of those drawers.  I believe I was repeating something along the line of "Ain't no Ma Peacock under MY bed.  Uh uh.  No way.".  But, you'd have to ask my roommate to be sure.