I’m a sap at heart.  Well, sometimes.  Usually I’m stopped in my tracks when the universe reminds me I have left a small dent in it for the better.

Thunderhead and I rolled into the parking lot behind the apartment building a little after 1:00 Sunday morning after an enthusiastic night of board games.  As I’m lumbering up to my garage door, I see a small kitty dart out of one of the open garages and hide under the truck parked two stalls down from mine.  It’s not unusual to have a stray or two around.   I mean, Mamma kitty and Seamus were never domesticated, and I can only imagine they’re out being fruitful and multiplying.  We’ve started seeing Mamma more these days since she’s expecting again, and the garages offer a little more warmth and protection to her.


Thunderhead got out of the car while I pulled into the garage.  As I’m pulling the door closed behind me, he tells me that the cat wasn’t Mamma this time, but an all black kitty with an injured tail.  As soon as he’d started talking to him, he’d stopped in his tracks, looked back and immediately started mewing and purring.  As Thunderhead had walked towards him, the kitty slowly approached, dropped to the ground, and showed his belly for a moment before getting spooked and scampering away.

Because of the hour, however, Thunderhead decided not to give chase and headed in to let our own furbaby out and officially call it a night.  Curious, I decided to stay behind and see if I could say hello. I’d seen the kitty dart behind the garage, so I made my way back there, talking to him the whole time.  I stepped as lightly as I could, hoping to at least catch a glimpse.  As I rounded the corner, I saw him silhouetted in the sulfurous glow of the streetlight, just standing there watching me.  As I talked to him, his tail dropped a bit, and I could see some of the extent of the injury.  I couldn’t tell if it was broken, or just the hair had been violently stripped away from the flesh.  I winced a bit, but kept talking.  He trotted a few steps in my direction, purring for me as well.  I stood, watching and talking.  He didn’t move away, only dropping to his back and wiggling like a kitten would when it wants to play.  I moved closer, talking the whole time.  He stayed right where he was, looking at me with his clear eyes.  As I got within a few steps, he got to his feet, and sniffed my outstretched hand.  As soon as I met his approval, he started winding his way around my leg, purring, and letting me pet him all over.

It’s then when I began to wonder if this wasn’t one of Mamma’s previous litters from the past summer.  She had a clutch for 3 solid black kittens that disappeared before they were weaned.  Thunderhead and I had made it a point to spend some time with them so they’d be socialized and adoptable when the time came.  We’d go coax them out of their hiding spot, pet them, and let them sit on our shoulders like tiny parrots.  It was the heat of the summer, and the humidity was sticky and close in the garage where Mamma had built her nest.  We maybe got a week or two of kitten cuddles, but it was precious to see them come out of their hiding spots when we approached. 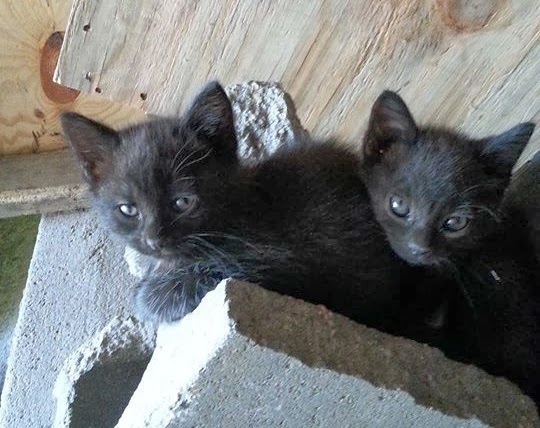 Then one day, Mamma and all her kitties were gone.  We didn’t know what happened to them, only that they weren’t there when we went to visit day after day.  Finally, we stopped looking for them, resigned to the idea that they’d met with an unhappy end.

Fast forward to last Sunday morning, when this solid black kitten reappeared in the same garage.  Maybe I’m imagining things.  Maybe I don’t spend enough time around cats to know that this is normal for some.  But there’s a small part of me that can’t help but wonder if this wasn’t one of the triplets we snuggled with back in August.  Some 6 months later, a lifetime to some feral cats, this little kitten was behaving like I’d just come home from work on any normal day. This is a cat the world had done no favors for who remembered those simple acts of kindness and took a risk that he’d be offered them again.

I didn’t stay out with him very long.  I was tired, and the feels were softening the creases around my eyes from squinting against fatigue.  But it did get me thinking about risks, rewards, and the power of kindness.  I have slipped.  I know this.  Often times, I’ll play it safe and risk nothing because I know exactly what I’ll end up with.  It’s no better than before, but it’s also no worse.  Have I thrown kindness to the elements, to be scattered by the wind before?  Yes.  When pushed or confronted with something that I feel needs more barbed wire than kid gloves I have.  Am I proud of it?  No. The last time I indulged, Karma came back to poison my frame of mind for a week.  I appreciate the reminder of the power of kindness wrapped in a soft kitten package.  I most certainly hope the kitty with an injured tail and healthy spirit returns.  I could use some kindness sustenance in my diet.
Posted by Ephemily at 2/25/2014 12:23:00 PM