In my recent bid to use my bossy (instead of greasy) elbow and push my crap around my apartment, I came across the textbook we used in charm school all those years ago.  Originally published in 1965, White Gloves and Party Manners is a yellow, hardcover manual about how to white wash your kid into being socially acceptable.  And the thing is, it's written in a voice that's speaking directly to the child.

Let me first say that I'm not anti-manners.  There are more than a few people in this world that don't know how to behave in a way that won't get them punched in the face, eventually.  Politeness, knowing your place, balance, and behavior that doesn't inspire violence goes in the pro column.  But, there are times when you've got to break or ignore the rules to get something accomplished.  The real lesson (that's hard to teach) is knowing when.  I'm afraid this book doesn't really help with that.  The tone is such that this is the be-all end-all source for every social situation.  My opinion is that there's still room for a "but" and a "why?", and there's no allowances made for that.  It's written in absolutes.


Along with the manual came a workbook that included such entries as how to wash your face, brush your hair, sit "pretty" and write your name.  None of this sounds sketchy until you read the text. 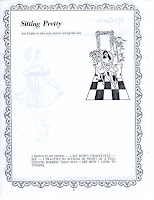 Have Daddy take a photo of you sitting pretty and paste it here.  I don't plop down, I sit gracefully and practice in front of a mirror so I know what I look like to others.  . . .  Please tell me I'm not the only one who's skin crawls at the use of the word "Daddy", or see such an emphasis on physical and social appearance.  The book also uses absolute language that makes it seem as if there's no other way to behave than what's offered in its pages.  In the introduction, the authors state that this book will tell you what to say to make people like you, and that manners never change.  Well, I can't swallow both of those statements without salting the heck out of them.  You can't make a person like you.  You can appeal to what statistics say the majority will approve of, but others deciding to like you isn't as simple following a recipe for meatloaf.  In other words, haters gonna hate.

Also, manners *do* change.  I can tell you that my being brainwashed into thinking that a lady doesn't invite herself along to gatherings has made me appear standoffish and snobby, when in fact I'm just trying to fit in.  (My personality is outside the peak of the bell curve, and pretending to be normal isn't always easy.  Sometimes, you need the workbooks.  Just not this one.  It's more like training you to be a Stepford wife than a pleasant human being.)

Manners, like language, change over time.  Don't believe me?  When was the last time you heard prythee?  Or, what about rolling your eyes when nana didn't know what you meant by "lol"?  Certain things become accepted, and lifestyles evolve.  There is an awful lot in this book that is in no way relevant in the second decade of the 21st century.  I mean, when was the last time you wore white gloves outside of a costume party?  So much has changed, and there's enormous gaps in what's covered.  If you're going to teach manners, please, let's talk about the broad ideas behind how not to be an internet troll, and that road rage is wasted energy for example.

If given the chance to reboot the book, I'd love to see the references to looks removed.  I mean, I understand there's a place for what kind of hairstyle looks good on you, and how to wash your face, but are these really germane to the idea of how to behave in polite society?  And by society, I mean the group of humans outside of your front door, not the hat-wearing, pinkie lifting, cerulean blooded throwbacks of the world.  Sure, good hygiene is important, but I don't equate that, or what face shape you've got dictating what sort of hair style you should choose with manners.

Really, there is some good advice here that probably won't go out of style: "Be kind, not bossy, boastful, or selfish.  Learn to keep a secret and a promise.  Return what you borrow, and share things.  If you make a mistake, admit it. . . . Don't play favorites with your friends."  It teaches you that you should be polite to those who serve you, like a waitress or a bus driver, and that please and thank you are important.  But, it doesn't really make allowances for a person to be their own, or acknowledge that women's roles in the world has changed in the last 50 years.  I mean, the sentence "Young ladies must learn how to be a proper hostess, but when you go to public places it is the gentleman who takes over." is probably going to make a large percentage of equal rights folks squirm.  Gender roles aren't what they were when the book was originally written, and that dates the book.   Also, the tone feels like there's a mold you're supposed to fit, even if those around you don't.  I think we can certainly embrace individuality and equality without sacrificing politeness.

I understand that being proper shouldn't be discouraged, but my feelings about the paragraphs cited (and by extension, the book) is that this doesn't help to develop a girl's personality, but merely apply a coat of polish to the outside.  (Mine happened to be heartbreaker red polish, in case you were curious.)  I hope I'm not the only one who feels like this is sending the message that it's ok to be a gas station burrito; cooked on the outside, but raw in the middle, and that it's not ok.  The reader is left without guidance about personal development.  I find that to be of equal gravity to a person's behavior towards their peers as well as those of different social ranking.  Does that mean I think the book is useless?  No, not entirely.  I think it's worth considering if you are good at seeing shades of gray, and useful as a supplement for how to cultivate depth of personality.  But, do I think anyone reading it should realize it's not gospel, that the world has changed since 1965, there will be an exception to almost every rule, and asking "why?" shouldn't be penalized if it's legitimately an effort to understand.