I have a raging overbite, and a lower jaw full of teeth throwing elbows, jockeying for room.  I get headaches, my jaw clicks, and I was at least one orthodontist's cash cow.  The thing is, it's like this on purpose.  Well, kinda.

My headaches started when I was little.  It was to the point that eventually, Tylenol was no longer working for me.  I can't take it with much relief still to this day.  Like my adult teeth, once my baby teeth grew in, had an overbite.  In my childhood photos, my smile was mostly me biting my lower lip like I'd tasted the nectar of the gods and was trying to suck all the last remaining flavor from my skin.  These are related, trust me.

I don't remember how old I was when the idea that I needed braces surfaced.  I do remember being driven at break neck speed across town to get to the orthodontist's office before they closed for the day though.  After having molds taken of my mouth, where the gooey plaster dripped down and tangoed with my uvula, it was decided that my teeth needed some help. I was told I'd be fitted for headgear and a bite plate until my jaw had moved into a position that made braces doable.  Oh, and as an added benefit, my headaches would go away.  Hmmmm.  I might still count my age on my fingers, but something smells rotten in Denmark here.  My prepubescent self was skeptical about that.  Tell me more and convince me if you expect me to play along.  The facts and reason why this was true never came.  Instead, I got more goo in my mouth to make a mold for the plate, and two posts put on my back molars for me to attach the headgear to when I slept.

Let me explain this bite plate.  It was clear resin, and fit somewhat tightly against the roof of my mouth.  When I was wearing it, my teeth didn't meet at all.  There was about a quarter inch gap between my jaws.  What it appeared to do was correct the appearance of my jawline, but did nothing to actually move my teeth.  I say it fit somewhat snugly, but I was expected to do everything with this thing in, even eat.  So, because of that, I had to be the youngest person I knew to use denture creme.  I slathered that shit all over that plastic plate until it oozed out the sides, ran down my throat, and made me retch.  Once I had the plate in place, I talked with a lisp, my head hurt from the pressure in my mouth, I gagged on paste, and I drooled everywhere.  Oh yeah, I'd ask me to the dance.

Imagine, if you will, trying to eat anything other then jello or soup if your jaws don't come together.  There's no way you can chew you food effectively.   I tried eating lunch at school for three days before I gave that shit up.  Hell no.  Nobody comes between me and my food, even if it's from a public school cafeteria.  Buh-bye bite plate.

Of course I got nagged about not wearing it.  My folks I'm sure spent a pretty penny on my dental needs.  Thing was though, since I didn't understand it, and it was really making me uncomfortable, I rejected it.  After about the third week of blowing off my folks' telling me to wear it, I got tired of the nagging and "accidentally put the couch" on it.  And I'm not talking just any couch.  I'm talking a hide a bed couch that needed 4 people to move it.  By "putting the couch on it" I mean I dropped the foot from a height of 6 inches.  My dental torture device shattered into more pieces than even a Smithsonian curator would have the patience to put back together.  This effectively put the ball back in my parents' court.  I can't wear it.  It's broken.  I need a new one.  Your move, fuckers.

I never did get a second plate.  Imagine that. 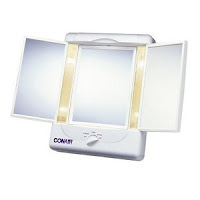 Next, we moved on to the posts on my back molars.  I got so tired of the sores they made on my cheeks, and the clear wax that I was supposed to put on the metal that I decided to do something about it.  Now, as a kid, I hated having loose teeth.  The sensation just made my skin crawl, and it also made it hard to eat.  As I've said, nobody, or in this case, nothing keeps me from my food.

After about the third tooth that I'd lost, I gave up on letting nature take its course.  I had gotten a manicure set for Christmas, and I decided that those were my Craftsman tools for the job.  At almost the first sensation of a tooth wiggling, I was in there pushing, prying, and wiggling to get that tooth out in front of my trusty lighted Conair vanity mirror.  I figured, if I could do that, a little steel and cement wasn't going to be any challenge.

So, I went to work with my same trusty manicure set.  I poked and chipped and leveraged the arms on the actual headgear to get those damn bands off my teeth.  What was left was some tough cement, but that metal gave way to my sheer determination.  I did this not once, not twice, but three times.

I think my folks finally realized I meant business when I got the last set off when I was away at the military summer camp they sent me to for 5 summers.  They had to send me to a dentist in Culver Indiana, which has a population of 1539 people.  That meant that they had to schedule the appointment from 3 states away, the school had to arrange transportation, and they had to somehow wrangle me into going.  You can imagine how not pleased this made them.  Exasperated, they quietly declared me the winner in the battle of the overbite.  The posts and leftover cement were removed when I returned home, and my teeth were allowed to grow as they would.

So, I have a raging overbite, and teeth that are throwing elbows, jockeying for room, but I also have proof that I'm a stubborn, headstrong, don't fuck with me because your pain ain't shit badge of honor in my mouth.  And that mouth of mine is perhaps my proudest possession.